The club was formed in the mid-seventies when running and athletics in Weston was virtually non-existent except for that taking place in schools who were doing a good job producing a high standard of athlete. The schools realised that the outstanding students needed to progress so they were encouraged to join clubs such as Bristol A.C. and Westbury Harriers. This was fine, but brought its own problems of transport, attending training sessions, specialised trainers etc, although they did have access to the big National Leagues and excellent competition.
A suggestion was made to form a local club and a first meeting was attended by local runners, local teachers and youngsters & parents. The decision to go ahead was made together with agreeing the name of Weston A.C. club officials and club colours. Those attending the first meeting, helping to set up the club from the start, included Reg and Clive Owen, John Green, John and Gillian Hewett, Dave and Mandy Jones, Brian Popel, Arthur and Andrew Quick, Michael Roberts and Jim Dixon.
JOIN US

Throughout our history we have used many facilities for training. The locations include Weston Cricket Club, The Rec, Drove Road, Priory School and Hutton Moor Leisure Centre which is our current base. Summer Tuesday training currently takes place on the playing fields at the rear of the leisure centre with winter training held on the promenade and adjoining spaces. Hutton Moor LC is used as the meeting point for our Thursday group runs and other sessions.

In the early years the majority of the activity was track and field, the club was affiliated to various Leagues to give the growing numbers plenty of competition. These included Avalon, South and West, Avon and Midland Leagues for track and field. Winter activities included the Gwent, Avalon, Gloucester and the Wilts and Border Leagues for top class Cross Country Running. Road Running was mainly undertaken by the small band of senior runners, who entered races very similar to those of today’s type, such as half & full marathons, 5 & 10 miler’s including the Weston Prom Runs. In the late 1990’s a decision was reluctantly made to close the junior section and focus on the growing interest in road and off-road running for athletes over 18. The club no longer participates in Track and field leagues but is affiliated to the Gwent cross country league which teams and individuals can take part in. Interested junior athletes are now encouraged to join North Somerset AC who meet at Priory school in Weston or Clevedon AC.

In 1998 Weston AC amalgamated with Wyvern Road Runners and has grown strongly to be the club that it is today continuing under the name Weston AC.

2008 saw the introduction of a Triathlon section which has continued to grow in numbers currently having a very active membership of experienced and new participants to the sport. The club now has a number of licensed swimming and cycling coaches and leaders.

Members have long supported both road and off-road running entering many of the growing number off Ultra races, Multi day and Festival events. More recently a separate section, Trail Weston AC (TWAC) has been established to focus solely on off-road running. TWAC meet at some of the fantastic locations for this activity around the area on Monday nights and regularly have organised activities at weekends.

The general interest in running, the establishment of the TRI and TWAC sections together with many new members introduced to running, via the Xmas Cracker beginners groups first run in 2014, has led the club to grow to a current membership of approx. 400

The club have organised many local races over the 40 plus years of its’ existence with a number of well loved events sadly no longer taking place for various traffic and other reasons. The current portfolio of club races is shown below:

The 5 mile race route was first run on the Promenade in 1983. On that first December night, using the now standard 5 mile distance, the entry fee was 30p and there were 25 finishers. Since that start the race has developed to be a regular feature of the South West running calendar with a mid-week series of 9 races starting in September with the last race in May of the following year. The race HQ is now at the refurbished Bay cafe and features categories for senior male and female runners together with vet 40, 50 and 60 categories for both male and female as well as series team competition for both male and female. The race regularly now has of over 300 finishers with a record entry in 2017 of 384. Entry is open to both club and non-club runners.

On the same night as the monthly prom run the club now organise a junior 1 mile race which takes place prior to the 5 mile race. Please see the prom run tab for more detail.

The Beacon Batch fell race was started by Bath AC. in 1989 and the organisation was taken on by Weston AC in 1999. Roger Hart and Rob Skeen have been the previous WAC race directors with Nick Briffitt being the current director. The HQ and route of the race has changed over recent years but the tough nature of the race remains with the highest point in the race always being the Beacon Batch Trig Point at a height over 1000 feet.

The Mendip Muddle is a tough 20K off-road race established by Pete Green, the race starts high up on the Mendips at Charterhouse and includes over 1500ft of climb. In 2001 Roger Hart took on the organisation of the race from Pete followed by Bryan Morley, Tony Hogg, Carol O’Leary and is now under the Directorship of Martin Hurcombe. The race has had the RNLI and more recently Weston Hospicecare as its’ charity with many 000’s of pounds being raised for theses 2 causes.

December 1988 saw the first ‘Cracker’ 10k race using a combination of beach, promenade and road. In the early days the race was organised by Wyvern Road Runners under the name ‘Wyvern Xmas Cracker’ with the name changing later to ‘Weston Christmas Cracker’ after the amalgamation of the 2 clubs in 1998-99. The success continues because of the splendid team work with all club members getting involved. Entry numbers have slowly been able to increase to the present limit of 2500 aided by ‘chipping timing ‘ and modern I.T. which reduces some of the work involved. The race has had Weston Hospicecare as the main race charity for many years with over £50,000 being raised by the runners for this cause.

Overall this means that Weston AC hosts 12 races throughout the year, raising thousands of pounds for charity and contribution to club funds to allow us to continually improve the service we give to our members and our race participants.

Here are the key points for exercising under the current lockdown:

You should maintain social distancing.

This includes but is not limited to running, cycling, walking, and swimming. 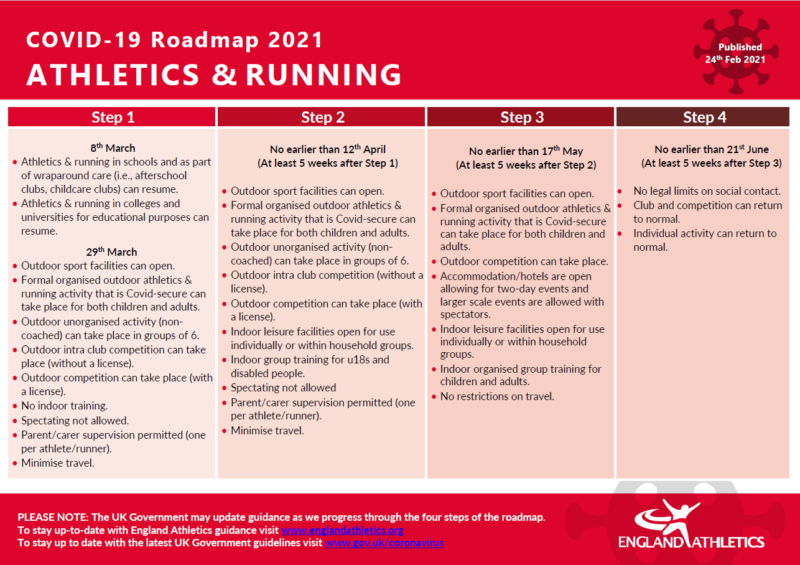 Please note that during the summer months, WAC interval sessions will take place on the Hutton Moor [...]

Here are the key points for exercising under the current lockdown: Training Outdoors * You should minimise [...]

Our usual Thursday night club sessions are currently suspended. There are however, small groups that arrange to [...]

Weekly forecast Summer arrived and the heat was quite extraordinary for a week or so, but the [...]

Weekly forecast The weather forecast this week promises the beginning of a summer spell for us. Monday [...]

Weather Forecast for Week Ahead The weather forecast is again mixed but at present looks to be [...]